by May Ellis
(Bolton, UK) Wonderful poems, submitted by May Ellis of Mazpahs Siamese and Orientals.

I like to have my sardines mashed
with a little bit of rice
You might think that’s horrible
but it’s actually quite nice.

When I ask for chicken
I like to have the breast
You can give the other nasty bits
to any of the rest.

I also like a pouch or two
if you mix it with fresh meat
My Mum says it’s for good girls
an extra special treat.

And when I want something different
which I very often do
I’ll expect some fish! The special dish!
That my Mum used to do!

You mix my fish with tuna
but never with the brine!
This is a definite NO!
at this I draw the line!

A prawn or two is optional
I don’t expect too much
But my Mum assures me
they add that extra loving touch!

Ooh ... I also like some yogurt
and just a little cheese
I will ask you very nicely -
and I may even say please!

"Hello" said the tomcat with a smile
"Trust your new friend for a while
Don't try to escape through this fence!
I'm the guy with experience".

"Come back later" she said with a grin
"When May's finished that bottle of gin -
I'll get through the cat flap when she's in bed
I'll meet you at eleven, behind the shed!

Time to go in, it's time for tea
Can you hear her? She's shoutin' for me".

Later that night we met as planned
Walked to the park, hand in hand
When I got home I felt the guilt
and ran upstairs and got under May's quilt.

I was thinking over and over, what have I done?
I was very naughty but it was fun!
Nine weeks later the kittens are here,
I didn't expect them to appear!

Now off the teats, mature at last,
Homes are needed quick and fast
May's not happy! Call the CSA* ...
I'm gonna make that tomcat pay! 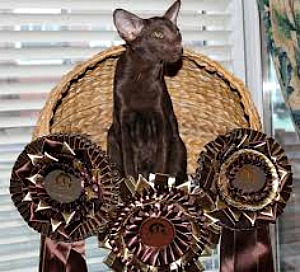 How A Cat Sees A Cat Show

I go to shows, I strut my stuff
Sometimes the competition's tough
I purr at all who prod and poke
Believe me, that's no flaming joke

I have a sleep, a pee, a poo
Weeeell it's something else for me to do
In come the public to coo and crow
At all the cats here at the show

I'm getting bored - I think I'll spray
A perfect end to a perfect day!

Thanks so much, May, for your truly wonderful poems - they're such fun!

I was just reading earlier today that the origin of the word 'tomcat' (according to Desmond Morris, in Catwatching) dates back to 1760 and a story called 'The Life and Adventures of a Cat'.

Before 1760, male cats were called 'rams', but in the story the male cat was named 'Tom the Cat'. The story became very popular, and 'Tom' has been used ever since for a male cat.