We Are Siamese! Siamese Cats in Books, Films, Cartoons, and Songs

'We Are Siamese If You Pl-ee-ee-se'

… are the opening words of The Siamese Cat Song, from Walt Disney's animated film Lady and the Tramp (1955) which must have been one of the Siamese cat's first appearances in the arts.

From We Are Siamese all the way through to Skippyjon Jones (the kitten who thinks he's a Chihuahua) Siamese cats have inspired authors, song-writers and film-makers for years.

Those Meezers! They get everywhere. So, to celebrate them, let's take a look at some of the places they show up. 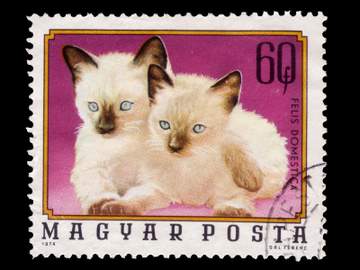 They've even been seen on stamps
Image © iStockphoto | Michael Cavén

Starting with the Siamese Cat Song that began it all, We Are Siamese features two fabulously mischievous (some would say downright evil!) not to mention spoiled and pampered Meezers, Si and Am, who terrorize the household in Lady and the Tramp.

Cats who stalk the goldfish, run up the curtains, destroy the furniture, and then lay the blame on Lady, the Cocker Spaniel heroine.

Talk about giving the breed a bad name! But Si and Am are great fun for anyone who loves Siamese cats and knows the trouble they can cause.

In the Oompa Loompa Song, they despatch the appalling Veruca Salt with these words:

Who do you blame when your kid is a brat
Pampered and spoiled like a Siamese cat?

We Are Siamese ... Animated Movies

Rather less pampered and spoiled, perhaps, a Siamese cat also turns up in the Walt Disney animated movie The AristoCats.

Walt Disney must have liked Meezers (well, they are very photogenic) as they're seen a lot in Disney films.

The AristoCats soundtrack features a number called Ev'rybody Wants to Be a Cat, performed by alley cats, Scat Cat and his band.

Watch closely and you'll see that the drums and piano are played by a Siamese cat called Shun Gon. (Soon Gone! Or - now you see him, now you don't. Very typical …)

We Are Siamese ... Movie Stars

Siamese cats have also starred in several movies over the years, beginning with Bell Book and Candle (1958) about an apartment-dwelling New York witch (Kim Novak) and her Siamese familiar Pyewacket.

In 1963 came The Incredible Journey, based on Sheila Burnford's book of the same name about a Labrador Retriever, a Bull Terrier and a Siamese cat, Tao, who make their way across 300 miles of Canadian wilderness to find their owners. A Siamese called Syn played Tao in the movie.

These films were also about two dogs and a cat, but the breeds were changed and although the cat, Sassy, had Siamese coloring it was actually a Himalayan Persian cat.

We Are Siamese ... Cats in Literature

A number of novelists and authors have written books about Siamese cats, notably Lilian Jackson Braun, whose 'The Cat Who' books feature Koko and Yum Yum, cats with a talent for solving mysteries.

'The Cat Who' series stars a divorced, recovering alcoholic, slightly-past-his-best ex-crime reporter called Jim Qwilleran, who writes feature articles for a small town newspaper. Jim fancies himself as a detective, but it's the cats who solve the crimes!

Doreen Tovey was another writer who adored Siamese cats, and owned many of them. Her cat stories, including Cats in the Belfry and its many sequels tell of life in the Somerset countryside with her husband, her cats, and other assorted animals – a life that now seems idyllic in its simplicity.

Siamese cats turn up in Old Possum's Book of Practical Cats by T.S. Eliot, in which the poem The Naming of Cats appears. In another poem, Growltiger's Last Stand, Growltiger 'the roughest cat that ever roamed at large' is defeated in battle by a band of Siamese ruffians – the proud owners of 'a thousand bright blue eyes'.

And a Chocolate Point is the star of The Expatriate Siamese about the adventures of Tia Maria, who lives with her owners on the Spanish island of Majorca.

We Are Siamese ... Books for Children

Sagwa, the Chinese Siamese Cat is an illustrated children's story written by Amy Tan (author of the Joy Luck Club), with drawings by Gretchen Schields. It tells how a mischievous kitten in China got her black paws and tail.

Skippyjon Jones is a big-eared, daydreaming Siamese kitten who thinks he's a Chihuahua! Written and illustrated by Judy Schachner, the Skippyjon Jones series of books is also aimed at younger readers.

Judy Schachner also wrote The Grannyman, about a very old Siamese cat who finds a new purpose in life when his family get him a kitten as a companion, and Bits & Pieces - a story about what happens when that kitten grows up and has a kitten of his own.

And we mustn't forget the fur-raising adventures of Henry, the Siamese cat in Cross Country Cat, Hot Air Henry, High-Wire Henry, Henry the Sailor Cat and other cat stories for children, written by Mary Calhoun and illustrated by Erick Ingraham.

In 2004, almost fifty years after it was written, The Siamese Cat Song was re-recorded by Hilary and Haylie Duff for the album DisneyMania 2.

So let's finish with a verse from the Siamese Cat Song lyrics:

I think that last line says it all, really. But then I am, perhaps, just a tiny little bit biased...

Further Reading - You May Also Enjoy: