Siamese Cat Legends. Lions and Monkeys and Kinked Tails and Goblets (Oh My!)

Where did the Siamese cat come from?

If we ignore the official history of Siamese cats for a moment and look at Siamese cat legends, there's an enchantingly whimsical story that speculates about the origins of Siamese cats.

The Lion and the Monkey

This tale was first told by British zoologist, writer, and broadcaster George Cansdale in his book 'Animals and Man'. I read the story in Sally Franklin's wonderful guide to Siamese cats, 'The Complete Siamese' (first published in 1996 and out of print now, but you can occasionally find second-hand copies on Amazon).

The story is said to take place after Noah selected two of each of the animals for his Ark, and it goes like this.

During the long weeks of the voyage, while waiting for the flood waters to subside, many of the animals got bored and a 'liaison' took place between a a naughty ape and a lioness. 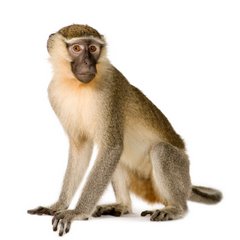 Did the Siamese cat originate from this ...
photo: © iStockphoto | Eric Isselée

This mating resulted in the arrival of the first Siamese cat, who was said to have "the attributes of an ape and the bravery of a lion".

Of all the Siamese cat legends and stories, this is one I would most love to believe! 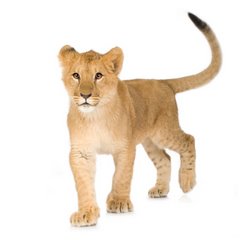 Most Siamese cats can be said to have the mischievous nature of a monkey and definitely the bravery of a lion. Isn't that so? While you're considering this, here are some of the other popular Siamese cat legends.

Several legends try to imagine how the breed might have got the kinked tails and crossed eyes that Siamese cats were once known for. (These characteristics are seen as faults nowadays and have largely been bred out of Siamese genes, so you don't come across them as often as you used to, but the stories are still fun.)

And there are still some Siamese cats with crossed eyes and kinked tails around.

Once upon a time in the ancient kingdom of Siam (or so the story goes) there came a period of war when all the men of the realm went off to defend their country.

They left behind a male and a female Siamese cat to guard a sacred golden goblet that had once been used by the Buddha.

After a romantic few days, doing as cats do when left to their own devices, the male, bored of his guard duties, wandered off to look for further pleasures.

The female, who was now pregnant, was left alone to guard the goblet. Overwhelmed with this responsibility, she wrapped her tail around the goblet's stem and fixed her eyes on it so that she wouldn't lose sight of it.

She waited and stared, stared and waited, and hoped that the men would return before her kittens were due. With all that staring, her eyes developed a squint and her tail became permanently bent from holding on to the goblet stem.

The men didn't return, and eventually, of course, the kittens could wait no longer. They were finally born.

Another of the Siamese cat legends tells the story of:

The Princess and the Ring Stand

Once upon a time (it starts, as all good stories do) in the ancient kingdom of Siam …

… there was a Princess of the Royal Household who loved to swim. Each day, she would make her way to her favorite bathing pool accompanied by her faithful feline companion.

Each day, she would take off her rings, and, for safekeeping, place them over her cat's tail. (The cat would bend its tail to stop the rings from falling off). Gradually, over the course of many years, the cat's tail developed a permanent kink.

And to this very day, there are still some Siamese cats born with kinked tails!

(This is true. There are. Although not as many as there used to be.)

Where To Next? You May Also Enjoy