Welcome to the April edition of Meezer Musings!

Not long ago I received a message from a reader, June, asking why I hadn't ever mentioned Snowshoe Siamese in my newsletters. And it's true - so this month that's exactly what we're going to do, taking a look at Snowshoes and some of the other breeds related to Siamese cats.

Siamese cats have lent their genes to many other breeds, including the Oriental Shorthair, Foreign White, and Havana. There is, in fact, a whole section of this website dedicated to related breeds, and also the 'lookalikes' - breeds that look similar and you might think would be related, but aren't.

To look at all of them would probably result in a very long newsletter! So this month I've chosen three breeds that are related to Siamese cats - the Balinese, the Tonkinese and the Snowshoe.

To do justice to them would take whole books (or websites!) so the sections below are purely a very brief overview - and any errors in history or coloring details are mine! I've included links to these breeds' pages on this website and to books for further reading.

For Doreen Tovey fans, we have a treat in store - and a request for help! Ann Marie Troy sent me some photos of a ceramic dish hand-painted by Doreen and would like your help if you know anything about it, or remember Doreen writing anything in her books about learning to paint on china.

But first, let's look at those relatives. Many thanks to June for suggesting this topic!

Graceful and Elegant - the Balinese

The Balinese breed, in spite of what its name suggests, doesn't originate from Bali. However the breed was named for the island, and in particular the graceful dancers found there, by one of the breed's early founders, Helen Smith from New York. Before this, they were known by the rather more prosaic name of 'Longhaired Siamese'.

So the Balinese is the Siamese cat's long-haired cousin, and everything about the breed is sensuous, elegant and graceful. Developed from, it is thought, Angoras which were occasionally bred to Siamese cats in the UK in the 1920s, and the Siamese kittens that are sometimes naturally born with long hair, their body type and facial shape is long, lean, angular and typically Siamese, with the Siamese bright blue eyes.

They are, quite literally, Siamese cats with long hair! Their coats are medium-length, fine, and silky, with no undercoat, making them easy to groom, and the defining feature of the Balinese is their beautiful, graceful plumed tail. They tend to be less vocal and less assertive than Siamese, but just as friendly. 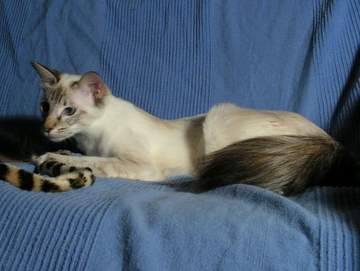 In the UK, Balinese cats can be found in all the Siamese colors, but only seal, blue, chocolate and lilac points are accepted in most American registries. Other colors, including flame, tortie and lynx point, like the one above, are known as Javanese (which, confusingly, is not the same breed as the European Javanese!)

There's more information about them here.

Streamlined and Striking - the Tonkinese

The Tonkinese breed has a complex history and I can recommend Linda Vousden's 'Tonkinese Cats - A History' and her even more detailed 'Tonkinese Cats'. These books tend to be hard to find but fascinating, so they're worth picking up you'd like to know more about the breed, if you happen to see them.

Tonkinese cats are in many ways similar to Siamese but tend to take their coloring from their Burmese relatives. While having the same Oriental body shape as the Siamese, they don't all have the pointed coat pattern of the Siamese and their faces tend towards the Burmese.

In addition to the color differences, a Tonkinese face is less angular, with a distinct 'break' in the nose rather than the long, straight nose of a Siamese, and their eyes are of various colors according to their color variation - green/gold, green/blue, aquamarine or pale turquoise rather than the bright blue Siamese eye.

The youngster below is a mink Tonkinese, and although he has yet to come into his full coloring, you can see that the difference in color between point and coat is not as distinct as it would be in a Siamese. 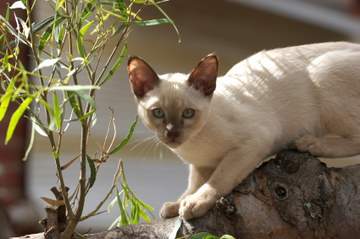 Breeders first started to cross Siamese with Burmese cats in the 1930s, but the Tonkinese didn't gain recognition as a distinct breed until the 1970s (Canada and the USA) and early 80s (UK and Australia).

In early development, in the 1960s, the breed was known as 'Golden Siamese' for the bronze-gold coloring they get from the Burmese side of the family.

Like Siamese cats they're active and affectionate and don't like being left alone - tending to get into mischief when they're lonely!

You can find more information about them here.

Dipped in White - the Snowshoe

Snowshoes, as their name suggests, have white feet! They should always have white feet, and the breed standard calls for a white, inverted triangle over the nose that extends under the chin and down the chest.

In a perfect example, the color of the front paws will extend just as far as the wrist joint and no further, but on the hind legs the white extends at least half way up the leg.

Snowshoes first appeared in the USA in the 1960s. Developed by a Siamese cat breeder in Philadelphia, Dorothy Hinds-Daugherty, progress in getting recognition for the Snowshoe as a distinct breed was slow due to opposition from other Siamese breeders who feared that the white markings could 'pollute' pedigree Siamese bloodlines.

Like the Siamese, Snowshoes should have long bodies, but compared to modern Siamese cats they should be stocky, heavier and more muscular - features they get from their American Shorthair ancestors. 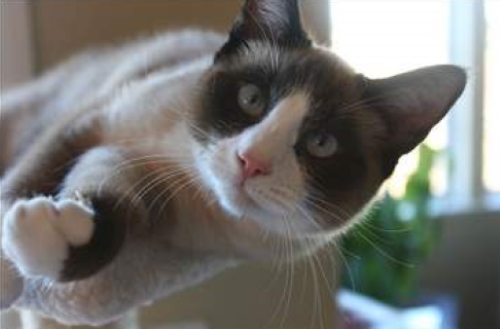 In all other respects they're very like the Siamese breed, with blue eyes and the same triangular head shape, although not as extreme as a Siamese.

Their coats are glossy and short - there's no long-haired version of a Snowshoe. (Although they have the same 'dipped in white' feet, they aren't in any way related to the Birman.)

Interestingly, cats of this color pattern seem to turn up a lot in rescues and shelters, often from feral litters, and they're a popular breed. On our Snowshoe page you can see further examples, from photos sent in by readers.

The breed's original name was Silver Laces, but their current name is self-explanatory and the breed is officially called Snowshoe, not Snowshoe Siamese (although many people like to add the Siamese part!)

A Treat for Doreen Tovey Fans - and a Plea for Help!

Visitor Ann Marie Troy, who provided some lovely photos of herself with Doreen Tovey as well as three of Doreen's cats, Rami, Tiah and Rama, for our Doreen Tovey page, has been in touch about a dish she'd bought on eBay.

Ann Marie bought the heart-shaped dish from a lady who'd had it for a number of years, who in her turn had bought the dish from a dealer. Nothing more is known about it!

The back of the dish, as you'll see below, is marked as 'Hand-painted by Doreen Tovey'. 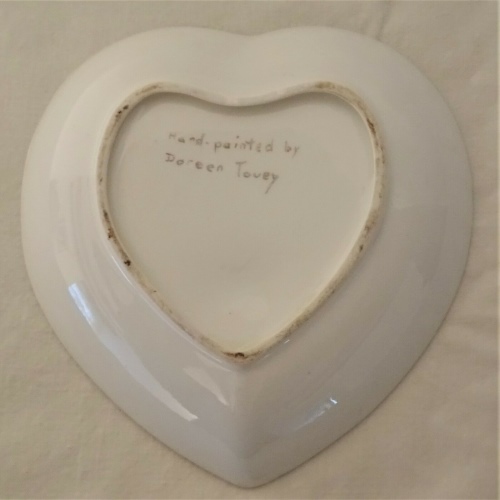 The front of the dish reveals a pink, heart-shaped design with a central drawing and the initials D.T.

Ann Marie knew and corresponded with Doreen Tovey for many years, so she's as sure as she can be that the writing is authentic, but knows nothing more about the dish although she does remember reading, perhaps in one of Doreen's books, about a venture into painting china. 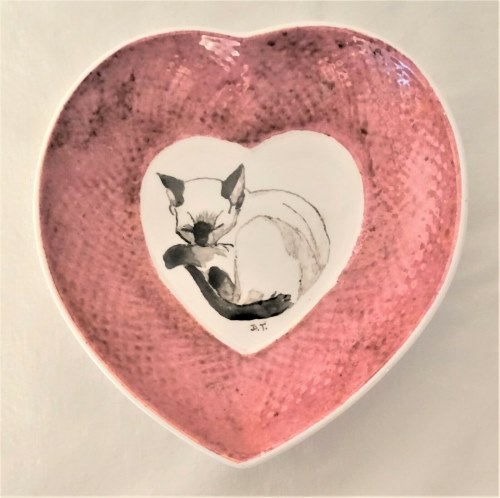 Pretty in pink! Sleeping Siamese kitten hand-painted by Doreen Tovey
Image with thanks to and copyright © Ann Marie Troy

Ann Marie (and I) would be fascinated to know whether anyone has seen this dish before, or whether there's anything anyone can tell us about it.

So, if you do have any information, or perhaps have something similar, do please get in touch - even if it's just to say that Doreen wrote about this in such-and-such a book!

I called this issue of the newsletter 'Family Matters' and, speaking of family, Mother's Day (although not the UK version, which has been and gone) is coming up on May 9th. So, to finish, here's a gorgeous Mother's Day card from artist Suzanne Le Good of a tabby (lynx) point mother and her kitten. 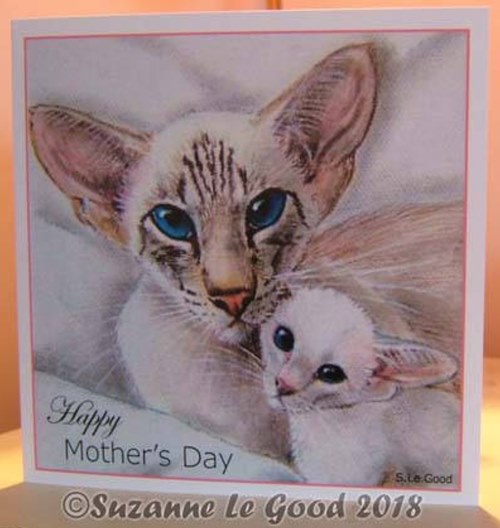 That's all for April. I hope to be back towards the end of May and until then, have an enjoyable, happy and above all safe, month. And, whether you're celebrating it with your own mother, or whether you're a mom to human kids, fur-kids, or any other kind of kids ... a very happy Mother's Day, too!