... the White Rabbit was still in sight, hurrying down it. There was not a moment to be lost: away went Alice like the wind, and was just in time to hear it say, as it turned a corner, 'Oh my ears and whiskers, how late it's getting!'

Welcome to July's Meezer Musings! Today, Saturday 30th July, is the International Day of Friendship. Greetings to Meezer friends everywhere, wherever you may be in the world.

July is often a feast for the senses, so this month, we're going to talk sense! Cat sense, in fact - we're going to take a lighthearted look at the senseS - the things a cat uses to see, smell, hear, taste, touch, and navigate its world - including, of course, the 'ears and whiskers' mentioned by Alice In Wonderland's White Rabbit in our opening quote.

Related to this topic, there's also a recommendation for summer reading, and as it's been so unusually hot in so many places recently, I've included our Topical Tips for the heat once again. (You may have seen them in May's Meezer Musings, but if you missed them first time around, you'll find them below.)

So, like the White Rabbit, let's start with the ears ...

The Ears and Hearing

Did You Know? Cats can hear sounds up to 1.6 octaves higher than a human can.

A cat's hearing is very acute - cats have an extraordinarily broad range of hearing which allows them to hear very high-pitched sounds of up to 1.6 octaves above human hearing.

A cat's ears are able to swivel and independently point backwards, forwards or sideways. This allows cats to accurately judge the source of any sound - for example, the rustle of moving prey. At a distance of three feet they're able to pinpoint the location of the sound to within three inches - very handy in locating moving mice!

It's sometimes said that white cats with blue eyes (though not generally Siamese cats) are deaf but this isn't entirely true, although they do tend to have more deafness than white cats with eyes of other colors. 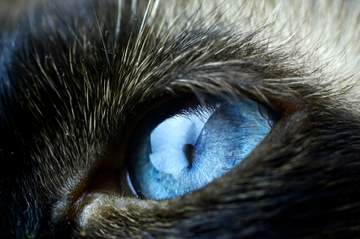 The Eyes and Sight

Did You Know? Cats can't detect colors as well as humans can.

Cats have a layer of tissue in their eyes called the tapetum lucidum, which enhances the amount of light entering the eye. This allows them to see very well in the dark - much better than most humans can - but also seems to reduce the effectiveness of their eyes in broad daylight.

Cats are often said to see only shades of gray but this isn't exactly true - it's thought that cats can distinguish well between blues and greens but find shades of reds and pinks confusing. Rather like a human who is color blind, cats see reds and pinks as shades of green, and purple as just another shade of blue.

It's thought that cats are shortsighted, making it difficult to see things in the far distance but much easier to focus on their prey.

When hunting, they also rely on ...

The Nose and Smell

Did You Know? A cat's sense of smell is up to 16 times as powerful as a human's.

Humans have around 5 million odor-sensitive cells in their noses, whereas cats have between 45-200 million!

Cats also have a scent organ in the roof of their mouths - the vomeronasal or Jacobson's organ. This is responsible for that curious, open-mouthed expression where they wrinkle their muzzle and pull their lips back when they smell something out of the ordinary.

This is called gaping, also known as the Flehmen response, a combination of smelling and tasting. Cats have a pair of ducts on the roof of their mouths behind the incisor teeth leading up to the vomeronasal organ and from there up into the nose. The Flehmen response opens these ducts, allowing the scent to travel upwards to be 'tasted' and smelled at the same time.

The Mouth and Taste

Did You Know? Cats are missing the gene that allows them to taste sweetness.

In 2005 it was discovered that cats are missing one of two proteins on a gene responsible for the ability to sense sweetness. This missing protein - a gene deletion or mutation - is found in the whole cat family but not in other animals; the relevant taste buds can still be found but are inactive in cats.

Some scientists believe this may be why the cat family evolved as hunters and obligate carnivores (meaning they must eat meat to survive) as this alteration in their sense of taste may have caused them to avoid carbohydrate-rich, sweet, plants and diverted them towards protein-rich diets, which would have had more flavor.

Hunting brings us on to ...

The Whiskers - Touch, Navigation and Hunting

Did You Know? A cat's whiskers help them to feel, 'see', and navigate their world.

Cats have four sets of whiskers, technically known as vibrissae, mainly found on their upper lips on either side of the nose. There are approximately twenty-four of these, in four rows. Some cats have more, some less.

In addition to these they have a few whiskers on each cheek, some on the chin, and around 6-8 whiskers in clumps above the eyes as well as others on the inside of their 'wrists' and the back of their legs.

The whiskers have very deep roots with many nerve endings, making them extremely touch-sensitive. They send signals to the brain which then creates a virtual, three-dimensional map of the cat's surroundings, including the objects they come in contact with around them and even air flow.

So the whiskers help with both touch and navigation, and also with hunting. Whiskers provide a cat with detailed information about its prey, even if that prey (like a mouse) is too close for the cat to actually see it.

If you'd like to know more about cat senses (and many other interesting facts about cats and how they relate to their world), I can thoroughly recommend John Bradshaw's Cat Sense.

John Bradshaw is one of the world's leading animal behaviorists and in this book he goes into great detail about how cats relate to humans and what they need to make them happy in their lives.

It's not a quick read, but it is an excellent reference guide to everything that makes a cat, a cat.

And still on the subject of senses ...

Cats usually enjoy warm weather and are fairly heat-tolerant, but can suffer from dehydration and heatstroke when temperatures soar.

With that in mind, here are ten tips for keeping your cat cool, healthy and happy in the summer months.

I'd like to finish with an apology to followers of our Meezers on a Monday posts on the Life with Siamese Cats Facebook page. Earlier this week all comments on those posts, going back several months, were spammed by two different entities appearing to advertise Siamese kittens for sale.

The spam comments have now been removed, and the spammers have been reported to Facebook and banned from the page. My apologies to you if yours was one of the comments affected.

That's all for this month. I'll be back at the end of August but meanwhile, enjoy the rest of the summer and stay safe in the heat!