Your Names for Siamese Cats

A little batch of Siamese cat names for you to enjoy!

Stories that have come in over the past few weeks, telling why some of our readers named their cats as they did with photos that say, even more than words can, why a particular cat is called, well … what it's called! 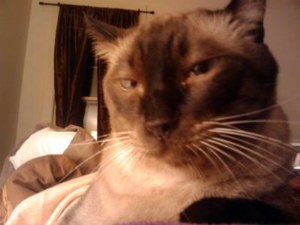 Gizmo was named by my sister, who thought he looked like a Mogwai when he was a kitten. 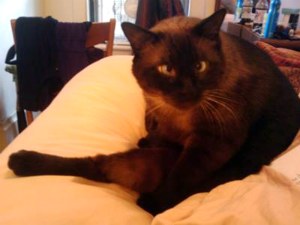 A few years later I adopted another seal point that was so cross-eyed he reminded me of Shari Lewis's puppet, so he got the name Lambchop.

It fits perfectly with his goofy personality!

From Eva in Syracuse, NY

My older boy's name is Bam. He is a Siamese Himalayan Ragdoll mix and he is the most loving cat I have ever had.

I named him Bam because the day I adopted him all he did was summersaults and flips.

He got into the most trouble when he was a kitten and I felt the name suited him very well.

Why? Because the wounded ten-week-old Chocolate Point kitty showed up on our doorstep in the month of June, 2011!

He is doing well and we hope to love him as much as our dear cat of sixteen years, Catianna!

My family got my cat Avery when I was seven.

About two weeks earlier I had seen a shooting star, and made a wish for a cat. I didn't tell anyone. We went to Petsmart and a man was giving away free kittens and my mother picked her out.

I named her Avery after the little boy in the story of "Charlotte's Web". I love her name even to this day.

She passed earlier this year, she was the runt in a large litter of Siamese mix. She was often aggressive in her younger years but eventually became mellow and even befriended our German Shepherd (named Money). 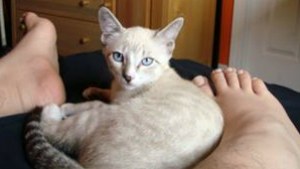 My husband gave me a three-month-old kitten for my birthday a few days ago.

He was born on the day of the royal wedding and he's a Siamese-tabby mix.

I named him Link after the popular "Legend of Zelda" videogame character. He is the most affectionate kitten and adjusted to us very quickly. He is gorgeous, I love him!

from Emily Sanders in Fort Worth, TX

I had a wonderful Oreo Cookie-looking black-and-white cat that I named Mookie, and at the same time I had two adorable orange long-haired fat cats that I named Mosey and Murray.

I had them all when they were kittens, and they were the LOVES of my life!!

They all passed away over the last three years. I miss them all dearly and will never be able to have them again :(

Sir Ralphie Joe Kid Cool Cat Earl of Newcastle is my uncle's cat. A rescued feral cat who only responds to one person, like a King to his commoners!

I named my cat that because Alexander means brave warrior and Lionel means lion. I chose those names because he behaved like such! 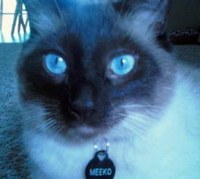 from Ericka in Rochester, N.Y.

My baby bear's name is Meeko. I named him after the raccoon I saw in the cartoon movie Pocahontas. It took me forever to come up with a name 'cause I got him when he was only seven weeks old. 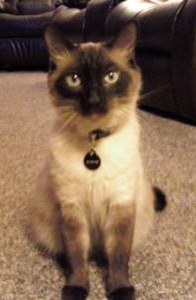 He was all white with piercing blue eyes and the tiniest bit of brown around his eyes and paws.

Same colors as a raccoon so I thought it wuz perfect. Then I remembered the movie I saw when I was eleven years old. And Meeko is the perfect name for him.

He plays fetch with a little mini Nerf ball, opens doors, wakes me up every morning with that very pronounced Siamese "Merrreow", sleeps with me every night, knows if I'm upset or sad and will come and comfort me every time. 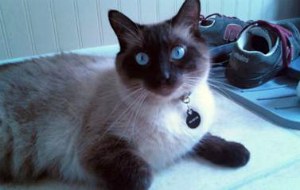 I love him! He could never be replaced.