So where's MY food then? Enjoying the sunshine and the view We adopted Mr. Leo from a Siamese cat lover who breeds Siamese. I went to the breeder with the intention of adopting a Siamese for me and for my boyfriend, who had never had a kitty before. ‎I knew the breed well, having had Siamese cats before.

We picked him up for the first time on December 30th 2012 when he was around six weeks old. Unfortunately it was too soon for him to handle the stress of the change of environment. He was neither eating nor drinking and we had to take him to the vet to get him some physiological saline. The poor baby was so dehydrated.

Our breeder was wonderful and agreed to take him back, and arranged for one of her nursing Siamese mamas to accept Leo and nurse him. He recovered with the love and care of the breeder but was still a "runty" compared to some of his siblings.

We got him back home at the beginning of March thinking everything would be fine and dandy this time but we were wrong. He was so happy to have all the food for himself that he over-ate and got diarrhea followed by major dehydration. So once again back to the vet for fluids.

That was awful. He was not able to get to the kitty litter box, and for three days we had to cover the couch with old bed sheets and wash them several times a day. I was keeping him on me so he could stay warm, which meant that I was also victim of his gastro-intestinal upsets.

During his illness I would wake up every two hours during the night to give him water with a syringe, and took 'sick days' from work for him. He finally recovered but was on a wet food diet and was not interested in drinking water despite all our efforts. So I kept on giving him water with a syringe for six weeks during the night, and was diluting his food with water to make sure he would not get dehydrated again.

We monitored his weight using a kitchen scale and a shoe box‎. We so much enjoyed seeing the progress of his recovery. We were happy at every gram he gained, and sometimes he would gain so much in only a few days!

My boyfriend even made an Excel spreadsheet and a weight curve graph. ‎ We are scientists so we like to graph more or less everything! 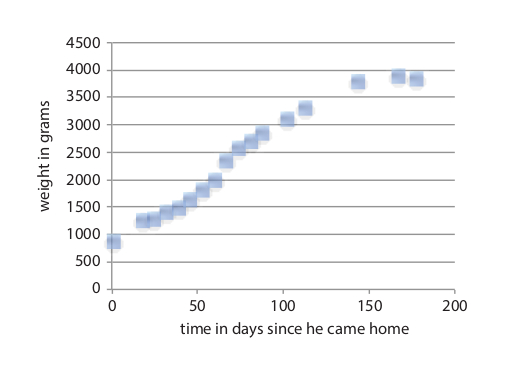 On a weekend when we had to stay home because of the awful Canadian weather, we switched wet food for dry, with the hope that Mr. Leo would drink water on its own. We wanted to be there to watch him and make sure he would not get dehydrated again.

I can't begin to tell you how happy we were when we heard him lapping water from the water fountain bought by his daddy, who was patiently was bringing water to it several times a night after we got him back.

Leo will be two years old in November 2014 and the bad days are now behind all of us. He is a happy kitty, playful, affectionate and often a goofy boy. 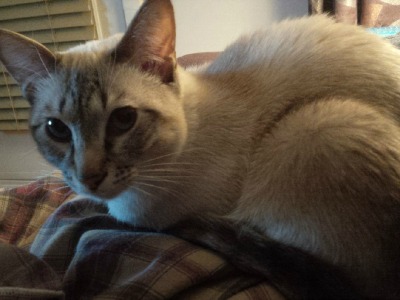 We had to adapt our home for him, so no toilet paper, Kleenex, Scott towels, make-up brushes, Q-tips, toothbrushes, shoelaces, purses, panties or socks are accessible to Mr. Leo! We learned that the hard way! He also has a good appetite for destroying stuffed toys.

One funny thing about Leo is that he has ‎one toe less on his left front paw. Instead he has a 'fused double toe' with a weirdly positioned claw, and when he walks on the parquet of our new apartment he 'clic clic clics' because of that claw. So he is also 'Mr. Leo the mutant paw'. But that does not bother him one iota since he still jumps and run everywhere. My boyfriend taught him to shake hands with the 'mutant' paw to get treats!

Mr. Leo recently moved to downtown Montreal with a wonderful view of the Mont-Royal mountain. He enjoys looking at the birds flying onto the mountain, and the neighbours on our floor can appreciate his vocal performances each time he hears the elevator. 'Cause of course if there is someone coming to the floor, it has to be for him!

We love him so much and we have no regrets for all the nights we had to wake up to feed him. He gives us so much in return. 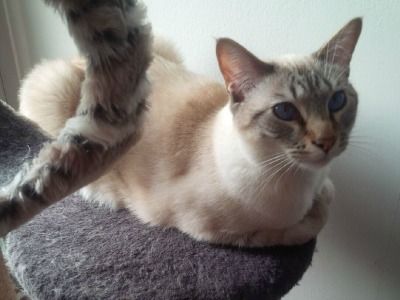