I've been contacted a few times recently by visitors who weren't sure of the color of their Siamese cats. As each of the cats is a bit different, I thought it'd be fun to put them all together on one page.

What do you think? If you have different ideas about any of the cats' colors, do let us know. Use the 'Comments' form at the bottom of the page (and give the cat's or owner's name, so we know which one you're referring to.)

Thanks to everyone who sent these in - I hope we've been able to help you.

Could this little fella be a tabby point Siamese?

(from Francesca in Spain) 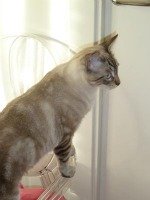 I know it sounds strange but actually I am still not sure that my cat is a Siamese.

I bought him as Siamese in a store (without pedigree) and each time I go to the veterinarians they tell me it is not true.

Can somebody help me? I think he could be a tabby point but ... is it true?

In any case I love him so much! Thanks, Francesca 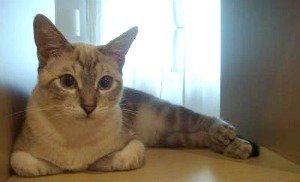 Francesca, you bring up some really good points here. Without a pedigree (or at least, knowing the parents of your cat) it's difficult to say definitely whether your cat is a 'true' Siamese or not.

In order to be a true Siamese, both parents also need to have been Siamese, and you may not always have this information. But does it really matter whether you know that your cat is Siamese or not? 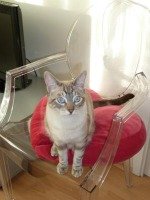 We all love our cats because of who they are, not what they are.

I think you're right. Your cat does have the markings of a tabby point (also known in the States as a lynx point Siamese).

It's a little hard to see his eye color from the photos. Are they blue? If so, it's very likely that there will be some Siamese in his background. If not, then he may be more of a tabby mixed with a cat of a different breed.

He's gorgeous, though, and there's no doubt at all about that!

You might also like to take a look at the photos of this tabby/lynx point Siamese mix, sent in by another of our readers, who looks a lot like your cat.

(from Vicki in Allenhurst, GA) 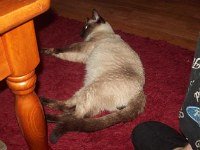 I was wondering if someone could tell me what color my Siamese cat Jojo is? I got him a couple of weeks ago from a co-worker of my husband's, who didn't know either.

He gave Jojo to me because he is not home much and wanted him to have a good home where he can get all the attention he needs. 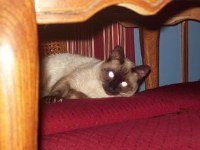 Jojo is so loving and so beautiful, I love him so much and I miss him when I'm at work.

I'm not sure how old he is but he has beautiful color on his coat and although you cannot see his eyes, they are a beautiful blue.
My reply:

(from Samantha in Wisconsin) 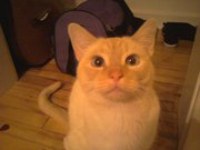 I know for sure he's a Siamese, but I'm not sure what kind? He's very possessive and gets jealous pretty easily. He is a major sweetheart though, most of the time. I'm the only person out of three that live in my house who he likes!

Yes, Siamese cats truly are sweethearts, but they can also be a bit jealous and possessive at times!

(from Kathleen in Tampa, FL) 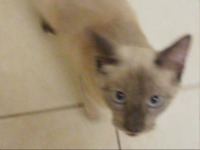 We got this handsome li'l boy from the pound. We don't know if he is in fact a Seal Point or not? The pound where we got him wasn't sure either. Here he is at roughly six months old, when we first got him home.

And here he is one year old and has the most beautiful blue eyes with dark ears, tail and feet. He has dark pads on all four feet.

He cries just like a human newborn baby - not a regular meow. Our neighbors thought we had a newborn in the house - LOL!

Because of the lighting, Simba looks two different colors in the pictures, so it's a little difficult to tell, but from your description I think you're right and he's probably a seal point.

(In the first picture he could almost be a lilac point Siamese - or perhaps a blue point.)

Check out the pictures on those pages and see which one you think he's most like. If his points are dark brown, then he's a seal point, but if they're dark gray, then he's more probably a blue point.

May 2022: A Question of Breeding
What Makes a Good Breeder?