Whisky doing what he does best

It all started when I had to send my Lotto to the Rainbow Bridge. He was about 20, not ill per se, but deteriorating. I worried. I hand fed him. He slept under the covers with me. If I put my hand down to stroke him he'd nip me :-( .

One day he wasn't well. He cried when he used his litter box and did whatever, and cried coming back. At one point he stopped and just lay down and looked at me as if to say 'Enough, Mummy, it's too hard'. I called the vet that night and the next night all his pains were gone. The last of my three moggies. This was last May.

I grieved so much I made myself ill and finally ended up in hospital. When I came out I was in no fit state to look after anybody. I was the one being looked after. 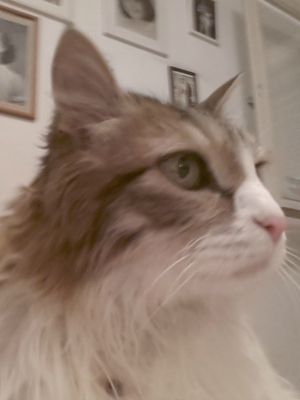 Lotto, the cat that started it all

In July I decided that the time was right. I went to my vet's clinic and told them I was ready for another cat (or two) and that I was planning a visit to the shelter. A few days before I went, the clinic phoned and asked if I'd like an 8-month-old abandoned Siamese. Well DUH! Not half!

I'd always wanted a Siamese cat but would never have been able to afford a pedigree and in any case I always went for the needy. He was needy. I got a beautiful but sad baby who'd had his whole life turned upside down.

Abandoned and deserted by his owner, chucked outside, and finally found by a dog-owning neighbour who took him home and cared for him overnight. She phoned the clinic, who phoned me, and on the Friday afternoon he was mine.

A whole male and we had no idea if he'd been vaccinated, so we took it as not and off we went. We waited a while for him to settle before neutering him but all went well. He was very quiet and didn't play much even though he had everything a kitty could want.

We had trouble naming him and I had people all over the world thinking of names until I settled on Whisky - I think because of his colouring. He ate, drank and used his litter box with no problem. The box was a closed one but he seemed a bit perplexed about the door so I took it off.

He didn't replace my Lotto of course. He wasn't meant to, but I can't live without a cat (which is strange, because as a young child I was absolutely terrified of cats until my parents got them into the house and thank goodness they did) but he wasn't happy. Yet.

In August my daughter phoned and asked me if I'd like a 2-month-old black-and-white street cat. Well Duh! again. 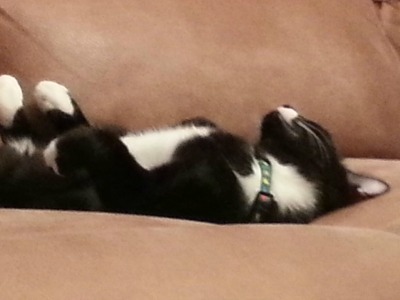 Blighty doing what he does best!

This tiny scrap came. Terrified, he spent the first night round my neck. All his necessities were in my bedroom. Food and water and his litter box. The cage if he wanted to hide, and a bed. (He'd use a bed during the day, but mine at night!)

I introduced them very slowly. They weren't left alone together and at night Blighty (I called him that because I miss England) was closed in my room with me. I started to let Whisky in a little bit. He went to see what Blighty ate and this tiny scrap covered his food with his paw and growled.

Came a day that I had to leave them alone together and all was fine. I found them both in Blighty's bed!

Blighty is also a neutered male. However he seems to think Whisky is his mum and used to suckle, with Whisky's agreement. This has stopped but I think he still thinks Whisky's his mum. They love each other very much and play a lot. 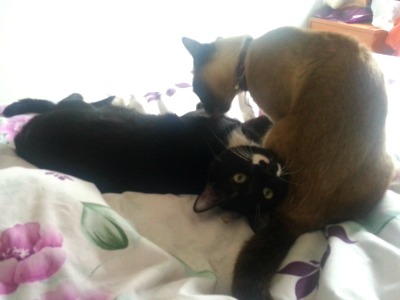 In the beginning Blighty went mad over the toys Whisky wasn't interested in. They race around the house, sounding like a herd of elephants but I have a problem - Whisky is a bully boy.

In amongst all the love and closeness Whisky will bite Blighty quite hard - he's trying to show Blighty that he's top cat, and Blighty knows he is subordinate. While he's being bitten and cries he'll be on his back fighting and sometimes gets cross. He does attack Whisky but only in play.

Whisky won't listen to 'No!' and I don't really want to shout or discipline him. I hope he'll grow out of it. He's very slim and dainty with a kink on the end of his tail. The tiny scrap is now bigger than his big brother, and a scaredy-cat!

Whisky will sit quite happily with my four grandsons all stroking him at the same time. His voice has arrived and he's incredibly nosy and bossy. I love both of them so much.

Whisky's very much a lap cat but hates to be picked up, as does Blighty. Obviously I pick them up to cuddle and kiss them and they are not at all happy but there are no scratches or bites.

And that's my story of my poor abandoned Siamese and his brother/son.

Judy, thank you so much for sharing your story with us, it certainly sounds as if Whisky and Blighty have bonded well even if they occasionally fight. There's a definite hierarchy among cats and Siamese can be very dominant! (They know their place at the top of the tree ...)

Lotto was gorgeous. I was chatting just the other day to a friend who lost her 20+ years old Persian recently. To lose a much-loved cat at that advanced age is like losing a family member - just devastating.

The cats who follow don't take the place of previous ones, but they do help to take the sting away and have their own special characters too.

I'm sure you've found this with Whisky and Blighty, and I hope they both have a long and fun-filled life with you.