Have you ever rescued or adopted a Siamese cat or kitten? Why not share your Siamese cat adoption story with us? Build a page about your cat?

You can do this by visiting the 'Your Photos and Stories' page (see the buttons on the right) but in the meantime, here's my own rescue story, which is followed by others from visitors to the site.

Bandit, the Cat With No Name

I'd been thinking about Siamese cat adoption for a while, mainly because we'd been 'adopted' ourselves by a neighbor's Siamese, who visited us every day to nap in our living room for a few hours before trotting home again.

This rekindled my interest in Siamese cats, so I looked for a rescue and adoption center. I fell in love with a picture of a male seal point on their website. He just seemed to have my name on him!

But I was about to go away on a business trip, so I promised myself that if he was still there when I got back I'd contact the adoption center straight away. 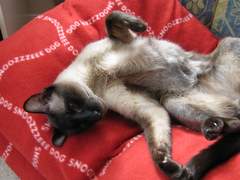 I learned that the cat (he didn't have a name, then) had been at the Siamese rescue center for about three months.

He was a stray and although many efforts had been made to find someone to claim him, no-one had come forward and because he wasn't microchipped, there was no way of tracing his owners.

The rescue center wanted to meet my husband as well as me, so one rainy day we drove over to be 'vetted', and, of course, to meet the cat.

Once we'd decided to go ahead, an adoption volunteer was sent to inspect our home to make sure that it was safe and suitable for cats, and after we'd been checked out we got the news that we could go and collect him.

I was a bit nervous about bringing him home! He seemed to be a pretty laid-back cat, but you can never tell how long a rescue cat is going to take to settle in.

Making Himself at Home 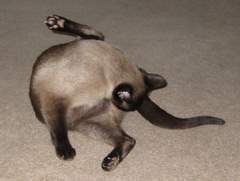 He kept up a constant miaowing from his carrier in the back of the car through the whole journey. This is not a cat who likes car journeys!

I needn't have worried. Within minutes of being let out of his carrier, he made himself right at home, as you can see.

Some rescue cats can be very nervous and hide themselves away, taking months to settle in. This was not one of those cats. He quickly learned to make himself understood – 'FOOD!' and 'TUMMY RUB!' are his favorite commands.

It took a few days to find a name that suited him, but eventually we called him Bandit because he looks as if he's wearing a mask.

He was a stray, so we don't know his age. The rescue center and our vet reckon that he was about four or five at the time of adoption. 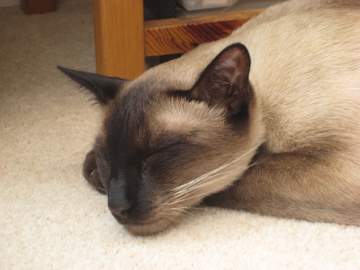 Click below for other visitors' adoption stories. There are some lovely ones!

Possum Blue, Rescued From a Feral Cat Colony
On the drive to the bike path I passed a feral cat colony. I stopped a few times a week just to talk with the cats and get to know them, and in August …

Midnight Meow
September 16th, around 3 a.m., in the middle of an Independence Day party, I hear a single, tiny meow coming from my garage. Like the tiniest meow ever. …

My Abandoned Siamese
It all started when I had to send my Lotto to the Rainbow Bridge. He was about 20, not ill per se, but deteriorating. I worried. I hand fed him. He slept …

Houdini, the Miracle Siamese
About six months ago I decided that it was time to welcome a new cat into my life, as my previous cat had died a year before. Although I was still heartbroken …

Tybalt and Mercutio: Meant To Be
I recently shared the story of Mr Darcy, my beloved Seal Point . A week or so before he died I was doing some end of life research and had gotten rather …

From Rags to Riches - by Cool Hand Luke
I am a pure bred Seal Point Siamese cat, and this is my story. I was adopted as a kitten by my first servant, who named me Lucifer. At first life was …

Zoe - the Little Ball of Pure Personality!
Several years after my previous kitties passed, I was finally in a position to bring another into my life and home. So one Saturday morning I headed down …

Cats? No Thank You!
My first experience with a cat was accidentally closing the door on its tail when I was six years old. Every time that cat saw me it would hiss and spit …

What's in a Name?
We have gained - accidentally - two rescue Siamese. A friend who knew I was an ex-Siamese breeder asked for an opinion on how to handle a pair of unresponsive …

Grandpa Sent Her to Our Door
It was 2003 and I had recently lost my grandfather, with whom I was extremely close. He had passed away a short time before that and believe it or not, …

Love at First Sight!
Growing up on a farm, I was always surrounded by cats. I loved my cats greatly, and missed them very much when I moved away from home for University. …

A Miracle Siamese
I am a private care nurse. Yesterday morning I pull up at my patient's house. Rain is pouring down and it is miserably cold. I see this box across …

The Little Siamese Living in the Gutter
I came home from work one day in late October and my fiancé told me there was a cat in our ditch. Being an animal person I immediately went …

Factory Friend Found!
Hello! My kitten's name is Sierra, I named her after the mighty redwoods in the Sierra Nevada Redwood Forest. But I want to go back to just last week. …

Mitad's Tale
I had just had to put down Malu, my Siamese that I had for eleven years, and was still devastated, but missed him. Life without a Siamese cat was unbearable! …

Ming, Our 'Garden Center' Cat
We had stopped at a garden center in Massachusetts, just to purchase some burlap to protect the rhododendrons we had recently planted at our camp in Vermont. …

The Artist Formerly Known as Frank
I work in a restaurant next door to my flat, and one Saturday in January I went outside for my cigarette break, and heard a mew, there was this TINY little …

Jenny
Eight years ago a stray cat was on my back deck, and I did not think anything about it. I thought it probably belonged to a neighbor, but when on the …

A Trip For Pet Food Turned Around
This lovely little cat adoption story sent in by Skylar in Virginia is a reminder that animal rescue is helpful for humans, too! Thanks, Skylar, for the …

Suzie Loves People, But Is a Terror With Other Cats
About three months ago, I adopted Sue-ling (aka Suzie), a 10-year-old female Tortie Siamese. Her original owner felt that she had to give her up, because …

Ching, My Seal Point Siamese, Rescued in the Nick of Time
I adopted my 7-year-old seal point Siamese cat from a rescue center that got him from a NYC kill shelter. He was there supposedly because he didn't get …

Kittens Abandoned at Two Weeks Old, in the Middle of November
I just recently adopted a Siamese cat (from what we can tell). He is 5 weeks old, a boy, and we named him Dobby, in honor of the elf in Harry Potter. Here …

Dutchess - Royalty From a Cardboard Box
Dutchess and her brother came to us via a cardboard box left outside the garage where I park my school van. Undernourished and not yet weaned, Dutchess …

Praia Fluvial Siamese Kitten Find!
Well ... as is usual ... we were adopted just over a week ago! We live in northern Portugal and our son and his girlfriend were visiting us. We decided …

Jazz: the Flame Point Siamese Kitten
One hot night in Alabama....while watching a movie still at 2am, a faint little miaowww caught my attention outside. As I open the front door, I barely …